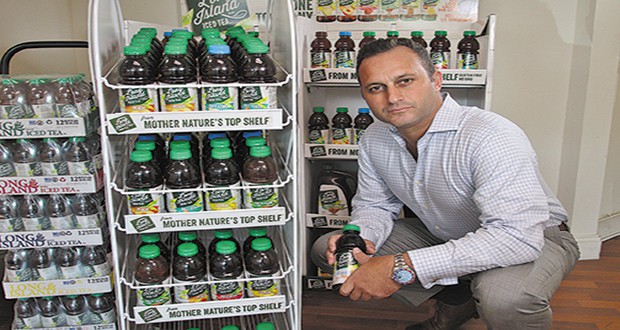 Philip Thomas in 2011 came up with the kind of million-dollar idea that cartoonists put in bright bulbs like halos over heads. He would roll out bottled tea called “Long Island Iced Tea,” playing off the name of the famous alcoholic drink and their own location.

What’s surprising is how quickly that turned into a million-dollar moniker. Hicksville-based Long Island Iced Tea racked up $1 million in sales in its first year, showing up on shelves all over Long Island – King Kullen, ShopRite, Stop & Shop, Fairway –and beyond.

“It was a bit easier than it should have been for such a young brand,” Thomas said. We were able to solidify shelf space with some of the biggest retailers in the region.”

After the brand expanded into a dozen states, executives a few weeks ago gathered at the NASDAQ, where they marked another milestone: They became the latest Long Island-based company to go public, under the “LTEA” ticker.

“Never in a million years did I think this small company we started five years ago would be on the NASDAQ,” Thomas said soon after ringing the exchange’s closing bell on July 29. “It’s an exciting step for the company.” Long Islanders aren’t only drinking the beverage: They’re buying into the firm. The company raised $7 million as it went public.

“It’s got Long Island in the title. It’s getting a lot of attention in our market,” said Tammy Straus, a partner at Jericho-based accounting firm Grassi & Co. “I could imagine having a company like Long Island Iced Tea public is one where local folks would want to invest.”

A taste for tea

While Long Island wines are making a name for themselves, the truth is tea is big business here as well. Long Island Iced Tea is only the latest firm to join Long Island’s own tea party, as local firms cash in on one of summer’s (and all year’s) hottest cool drinks.

Woodbury-based AriZona Iced Tea has grown into a beverage giant, selling dozens of flavors of tea and other beverages worldwide.

Whether or not any tea offers the “best stuff on earth,” beverage giants are getting big on iced tea nationwide as well.

In addition to making Nestea in Queens to be distributed by Nestle, Coca Cola has rolled out Fuze, Honest Tea and Gold Peak tea. PepsiCo makes Lipton iced tea, as the heavyweights battle it out.

Long Island Iced Tea, meanwhile, entered a crowded market, but with immediate brand recognition, die to a cocktail with a name that, according to the firm, originated on Long Island in the 1970’s.

The drink is the fourth most popular cocktail in restaurants and bars in the nation, according to a Nielsen survey this year.

“Companies spend millions of dollars for brand equity in a name. We already had it built in, “Thomas said. “We started gaining solid distribution in the supermarket channel. I think it’s a testimony to how powerful that brand name is”.

Long Island Iced Tea made a big splash, finding a market thirsty for its product, even if other low-priced, premium iced teas are on the shelves.

It has rolled out 10 flavors with more in the works, introducing products in 12 states, such as Florida, Virginia, Massachusetts, New Hampshire, Nevada, Rhode Island and parts of the Midwest.

The Boston Tea Party may play a major role in the nation’s history, as colonists tossed tea into the water to protest taxes. But lately, companies are embracing rather than jettisoning tea.

The reason is simple: Whether or not tea is liquid gold, it is a growing industry at a time when carbonated beverages are coming under ire. The U.S. iced tea market was $5.3 billion in 2014 and expected to expand at a rate of 10 pecent a year, according to an IBISWorld industry report.

“I think you are seeing the sharp declining of carbonated beverages,” Thomas said. “People are moving to a healthier alternative.”

The global, non-alcohol iced tea category is roughly $55 billion and estimated to increase at a 6.6 percent compound annual growth rate, according to a 2014 Euromonitor International study that describes yea as part of a “bright spot” in the beverage industry.

“Consumers are increasingly coming to view carbonated soft drinks, typically those that are caffeinated as well as high in sugar and preservatives, with disfavor,” according to Long Island Iced Tea’s filings with the Securities and Exchange Commission.

As soda gets slammed, more people are turning to iced tea, even if it sometimes has its own high sugar content.

Standing out in a sea of tea

With few barriers to entry, tea brands are coming up with ways to differentiate and expand.

Companies like Coca-Cola use artificial flavors for big brands, but Long Island’s teas are vying for the premium sector with brewed products not requiring preservatives or artificial flavoring.

“Our tea concentration is higher than a lot of our competitors,” Thomas added, seeking to stand out. Much as AriZona snagged market share with low prices and high quality, Long Island Iced Tea is keeping prices low.

Vineyards grow their grapes here, but Long Island-based tea brands typically have products made elsewhere. Long Island Iced Tea – which touts its products as “Made in the U.S.A.” – uses a half-dozen third-party tea bottlers up and down the East Coast.

“We think we’ll expand on that and potentially we’ll expand into other categories,” Thomas said of plans to go beyond 12 states. “We’re looking into juices, iced coffee, energy [drinks].”

The company also is looking to bring the brand to convenience stores – it’s already done tests with Duane Reade and Rite-Aid – and independent retailers.

“It’s the beginning of our journey,” Thomas said of a short, sweet trip so far. “We’re just starting.”

He believed the brand could catch on around the globe, as he takes the Long Island name on the road to locations where it’s exotic.

“We think we have even a bigger opportunity on an international basis. Long Island screams Americana,” Thomas said. “Can we take this brand to China, Europe and Asia and capitalize on that Americana name and feel?”

What about the idea of naming a non-alcoholic drink for a cocktail? Long Island Iced Tea is eyeing that sector as well.

“We have begun exploring entry into the $215 billion U.S. alcohol industry, with the hope to establish ourselves as a multi-product alcoholic and non-alcoholic beverage company,” the firm said in a Securities and Exchange Commission filing.

Perk Up With Iced Tea

4 Reasons to Stay Away from High Fructose Corn Syrup